For the last couple of days we have been helping out at a local farm called Finca Coco Solo in Viñales National Park. On the farm we have carried tobacco sticks, helped make a compost system, and fertilize papayas. Yesterday during our free time Tyson and I went to the church plaza to see what festivities were happening in town. We came upon a group of people playing intense games of Dominoes. It was interesting and hype because all the men were making fun of each other and slamming the dominoes on the table very intensely. While this intriguing game was happening, a big dog who was friendly to us before, glanced at a little dog passing by and lost his mind. We then were headed back to our room when the panaderia caught our eyes. There we bought a giant cake that consisted of almonds, chocolate, cinnamon, and cream for only 10 CUC, which is one of two types of currency here. Later on, the whole group went back to the park and that is when the men decided to let four of us play dominoes (Foster, Maria, Claire, and Dannie). It was a fun experience to see them play and laugh as they were fairly new to the game. Once that was done,  some of us stayed exploring the town to find a good place to dance and chill. We found one restaurant that had a live band and we started dancing.
The next morning we woke up at 7:15 and headed outside for the breakfast our host family had prepared for us. It was delicious and there was little left by the time we had to leave for work. We got in the classic car taxis and headed to the same farm where we have been working for the past couple of days. Today we separated into three groups one helped in the kitchen, one group helped with the compost, and another helped fertilize the papaya plants that we previously surrounded with tobacco stems. Today’s work was far less exhausting than previous days, and this may be due to the fact that it was much cooler today, and the jobs didn’t involve as much heavy lifting. During our lunch break, many of us sat down and played a few games of dominoes while other decided to take naps. Before we left for the day, we watched as the workers had to stitch an ox’s leg because he had cut it while helping with the compost. Then we headed to the Cueva del Indio, a cave located in some near by mogotes, limestone cliffs that are particular to Cuba. After paying the entry fee we explored the cave which was especially difficult for some of the taller members of the group. After walking for about 10 minutes we took a boat tour through the rest of the cave. Then we took the taxis back to our homes in Viñales. 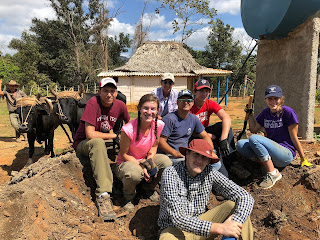 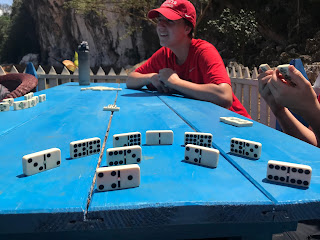 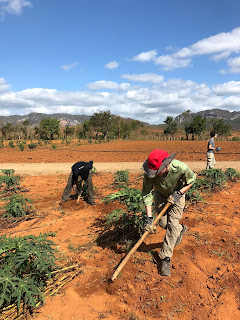 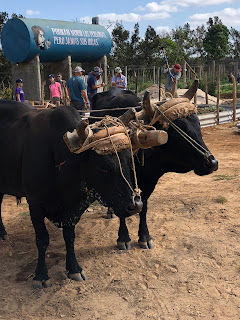 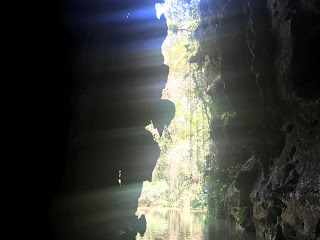 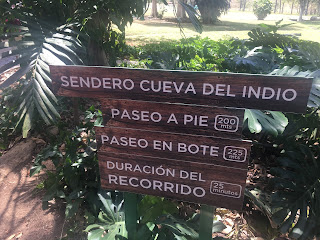