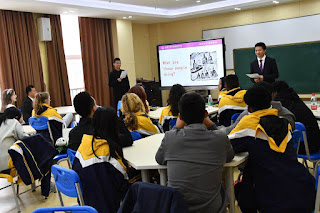 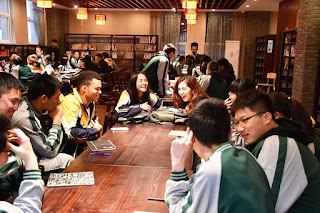 From Irvine Madenga ‘21:
Today we spent the whole day at the school and got a little taste of daily life at the foreign languages school. First we got a lesson about Confucius then I went to an English class where we were welcomed by a fun remix of the song welcome to New York except it was welcome to chengdu. Afterwards we joined the students in their morning PE and ran 1 kilometer with them. After that we listened to a lecture from Leo about Sino-US relations then attended a biology class that taught us about cancerous cells. We were then treated to a huge and delicious lunch which was followed by nap time, but we jus had fun on the playground instead. We then watched a debate about whether or not age limits should be included in the olympics. It was fun and intense and both sides became heated at points. Then we joined them in PE again but this time I played soccer and we had a Chinese vs America team. Although we lost it was very close. Then we went to an art class and made tie dye. After that we watched students dance and perform song with traditional Chinese instrument that we got to try afterwards. This concluded the school day. I went to my partner, Henry’s, fathers restaurant for dinner. It was delicious. As soon as I got home I was so full that I just went straight to sleep.

From Sophia Silis ‘19:
Started my day today with a steaming bowl of dumplings. My family laid another extensive spread of pastries, fruit and leftovers for breakfast- more food than any four people could eat, but nonetheless delicious. We were into their champagne colored Bentley by 7 and jamming out to 80s rock music. I honestly can’t tell if they genuinely enjoy it or are playing it to make me feel more comfortable. This was our first full day of school with the students. Though the sky was an ominous grey, this didn’t dampen the students excitement. Whenever the SSSAS students walk into the campus, we are treated like celebrities. It’s utterly crazy. We learned about Confucius in the morning, went to an English class, ran in gym to “All About that Base”, saw Leo give a lecture, ate some fun cafeteria food, participated in a debate that got rather heated, had some free time, went to a biology class focused on oncology, Chinese tie dye class, and music/dance class. It was a lot of fun. I can now say I’ve spoken in front of 200 people (which is the most I’ve ever done). After our busy day, my exchange student (Kazan) and I rode in one of those motorcycle carriage things to a street filled with food. We had fluffy cream and chocolate filled pastry wraps, a fried spiced potato dish and some green milk tea with a sweet cheese foam on top. After we ate, we hopped onto the subway to meet Kasan’s uncles, little brother, and parents in a restaurant off of Kuanzai alley. This restaurant was a haven from the chaos of the street. All of the food served to us had an element of drama: chicken was served to us in a pirate ship with a hidden message on the flag, a huge white chocolate sphere was placed on the table and melted away to reveal shrimp. Dry ice was everywhere. But what struck me more than the food was the continuous toasts the adults made during dinner over and over again. We even played a game where you would role dice and it would determine who at the table would toast who. Kasan, her little brother (AJ) and I took to the streets to explore after dinner. We ate sticky toffee, took some pictures, and wandered into a restaurant with live music. On the ride home, AJ sang to American pop hits in a screechy prepubescent voice that brought a smile to my face. I can’t wait to sleep in tomorrow and see what the weekend holds.

Email ThisBlogThis!Share to TwitterShare to FacebookShare to Pinterest
Labels: 2019, China

Hey guys..Are you Interested in Binary forex trading? Please let me invite you to this FREE masterclass strategy! Where they teach both Experienced and unexperienced traders the honest and real secrets behind successful trade,here you can learn how you can earn a profit of $10,850 weekly without stressing with just a minimum investment of your own personal choice through this strategy that has made me to be a successful and a professional trader.if you want to trade they also give traders the free opportunity to trade on their account which they can make money weekly,daily or even monthly depending on how traders wish to trade on their account you can also contact this professional trader if you are having problem in withdrawing your profit or if you want to know how to best trade or if you're trying to get back loss investment from brokers.feel free to email him at
{jefferytarrant432@gmail. com}
whatsapp:+1(708)490-8461
Remember this offer is absolutely FREE!!!?