Saturday we went to Madrid for the entire day. If you looked up, you would see intricately carved buildings, but I admit we were focused on the ground level buildings: the shops. I only brought some of my money which was good because I am sure I would have spent it all. My favorite store was by far Primark. It had four levels and it had everything from suitcases to makeup. The best part about it are the prices...it is really cheap, but the quality is still really good. We ate lunch about three, so by then I was starving. We ate at an American restaurant, but I think most of us Americans wanted to go to a traditional Spanish restaurant to experience the culture. As we were walking around Madrid, we saw protestors with signs. From what I could read, it seemed as though the protestors were saying that there was inequality in Spain. That night, I went with my Spaniard to her best friend's (who also had an American girl) house for a sleepover. It was really hot in the house, but I don't think it's a Spain thing, because my Spaniard's house is normal. Sunday was Father's Day in Spain, so we spent the day mostly at home. For lunch, we went to their new house that they are going to move into soon. We had a traditional Spanish dish, paella, that was made from scratch by my Spaniard's grandmother. It is a rice dish with lots of different types of seafood. There were lots of appetizers that my Spaniard's cousins and I put together. It was a lot of different types of Spanish ham and other meats. We also had pickles, onions, and cheese as appetizers. Similar to most meals, we had a dessert that consisted of fruit. We had strawberries, which was one of the only familiar foods I had for lunch. The new thing, however, was that we put condensed milk and red wine on top of the strawberries, which was delicious. We got back at around 7 and I was planning on just taking a nap, but ended up skipping dinner and sleeping through the night. Today us Americans are going to Segovia which is about two hours away.
-Helen Sweeney 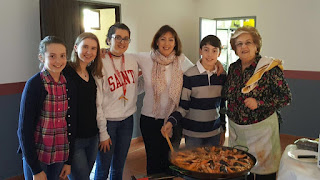 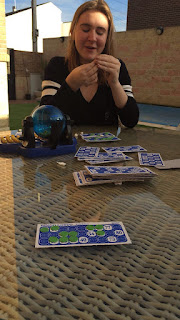 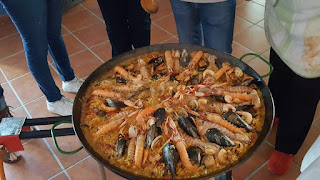 On Saturday I did the same thing that Helen did, but after they left, Ana and I stayed in Madrid to actually show me around. We went to one of her favorite stores, Zara. She also showed me the center of Madrid and showed me the different architecture of the buildings. While we were walking around she told me about the different universities and the people living in Madrid. The public universities are cheaper that the private ones, but you do a lot of hard work and studying when you go to a public one. Spaniards think that if you go to a private school you are paying for your career because they do not study that much and are very expensive. However, the one Ana is going to is private but she has to study a lot. Next she taught me about the different people living in Madrid. On one side of Madrid there are the really wealthy people and on the other side is where the poor people live. So in general Madrid is very expensive to live in. I also learned that the train or bus is what is most common to use if you do not have a car. On Sunday Ana, her brother Angel, her cousin Andrea, and I went to an amusement park in Madrid. Since there was no one there we got to go on most of the rides two or three times. We also saw a car stunt show that was really cool. I am very glad that we went because I got to communicate with people that I did not know. Also Ana let me order our lunch which was very hard but was good practice. Since the kids did not know English that well, I had to speak in both English and Spanish to help them learn English. When we left I was very tired but we drove to her grandparents house to drop Andrea off. They were very sweet and still remember my older sister from a couple of years ago. While we were there, they made fun of my accent, but it was ok. We also watched three different soccer games and had bread as a snack. Once we left we went home where we ordered pizza. We watched my favorite movie as a family. It was nice if them to have the English subtitles because I did not know every word in the movie. Overall my weekend was great and everyone was so sweet!
-Trinity Gourdin 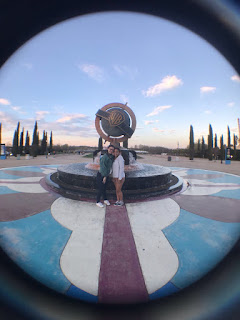 It's good to hear that the group is recuperating and having fun after the long trip over.