As we drive through the outer suburbs of Prague, the architecture reminds us that the Czech Republic was once a Communist nation. Gray apartment blocks reach up to an overcast sky, and rain patters on the windows of our van. However, as we climb a steep hill overlooking the Voltava, the sun begins to peak from behind the whitening clouds, and we see the old core of Prague. It is reminiscent of a fairy tale, with tall, twisting churches, wide, medieval squares, and a vast castle complex overlooking it all. We are excited as we get off the bus, excited to explore the rambling alleyways and centuries of history. We may only have two days in Prague, but I know that we will make the best of them. ~Sam Dubke 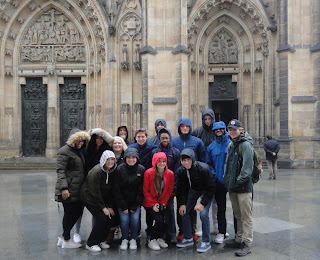 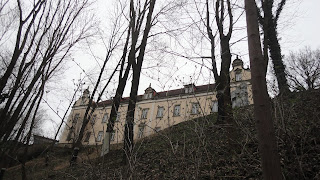 Today was one of the first of our heavier stops on the trip. As we made our way from Dresden to the Czech border, we stopped just outside the town of Pirna at what had been a Nazi euthanasia clinic. This clinic was somewhat unique in that for much of its use in the early 1940's it was used to exterminate mentally and physically disabled people who had been deemed "unfit to live." More than 15,000 victims were brought by bus to the clinic where doctors assigned them false causes of death, exposed them to lethal amounts of carbon monoxide, cremated their bodies, and threw their ashes down the hillside.


After we walked through the clinic itself, much of the group walked along a path that snakes down the hill to the nearby river. The open sky and light breeze were a welcome catharsis after the white cramped showers and furnaces. We walked and reflected in silence. The crunch of dry leaves underfoot beat out a slow rhythm to the birdsong.

"And what do the birds say? All there is to say about a massacre, things like 'Poo-tee-weet?'" 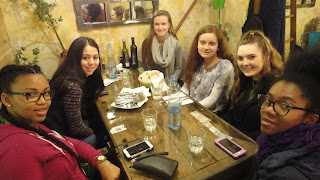 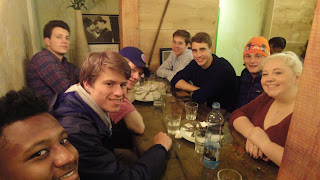