Saints in Romania: No Vampires Spotted :-(

Although we did not find Dracula, we had a wonderful first day in Transylvania. Our first stop was the Black Church in the city of Brasov. This church has been many different religions over the years since it was built, depending on who occupied the town and was in control at the time. We toured the church and admired its beauty in the detail that it was built with. The Fresco's, pulpit, pews, alter, and organ were all works of art.

After the Black Church, we were able to walk around Brasov for a bit before sitting down to a nice lunch in a restaurant right off the town square. We then got back in our vans and drove a short distance to the town of Bran where we got to visit Bran Castle, the inspiration for Dracula!

Hunter Ashley wrote about his experience in Brasov.

"Today, we visited the Black Chirch is Brasov. The church is an intimidating stone structure that towers over any building near it. There is one steeple that holds a huge bronze bell. Upon e teeing the church through a ten foot tall wooden door, you are greeted by vaulted ceilings and intricate stone carvings along the wall. The first time I entered the church itself I was stunned by the immense space that was within it. Your eyes point straight to an alter that has three beautifully drawn panels of the Holy Trinity. The remnants of certain pews and carvings relate to the many times that the church had changed religions. Today, it is Lutheran. To the right of the church there is a fantastic Mira of two Saints and the Duchess of Aragon. What was surprising about this mural is that it was painted in 1476 and it still survives to this day. The mural was to commemorate the royal marriage of the house of Hungary to the house of Arragon, as shown by the crests in both corners. Finally, a massive organ sits a floor above the entrance. I can not possibly tell how long the pipes were! Romania has been full of pleasant surprises and I can't wait to see what tomorrow brings." 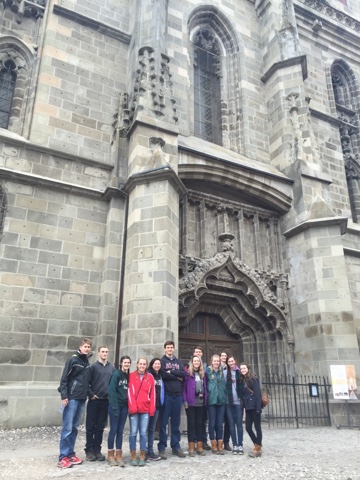 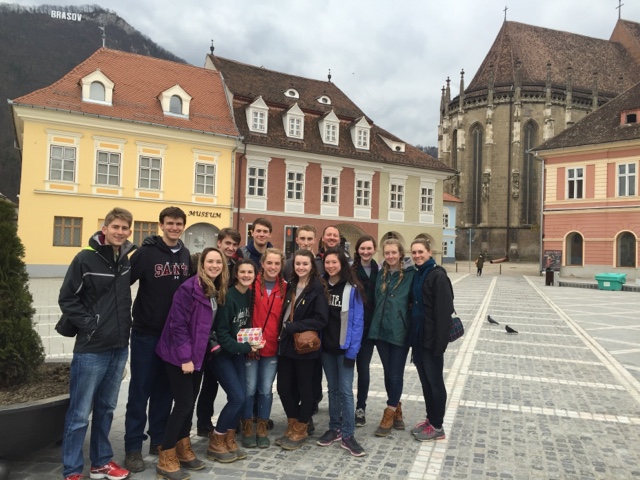 In order to reach Castle Brasov, we first had to climb a steep hill. This was due to the castle being built into a rocky cliff overlooking the town below. The castle itself is currently furnished with many relics and artifacts from the many owners who lived in the castle over the years. Although it was the inspiration for Dracula, no vampires have ever actually been spotted here. Instead, the story comes from the legend of Vlad the Impaler who was said to have lived at Bran.

A.C. Veith reflected on her afternoon in Bran.

"Today when we got to Brasov, we walked around before lunch. A few girls and I went into a bakery. I had two macaroons, one brown and one blue. We then ate at a small restaurant before getting back on the road to Transylvania. The party can was LIT! Once we got there, we walked down a small strip of stands. We walked up a short hill to Dracula's Castle. The castle looked big from the outside but nothing extravagant... Until you go inside! Just when you think a room does t have an outlet, it'll have a secret staircase. One staircase would lead you to a roof, where you could look out over Transylvania and some remains of the fortifying wall. The tour finished in a courtyard with a well, a gong, and a medieval torturing device. After we left the castle we had 20 minutes to explore Bran. Some of us girls wanted to buy slippers but they were too expensive-but a small pillow pet was o ly $10! So after my exciting purchase most, if not all of us, went to a cafe. Even though it was cold a few of us ordered milkshakes. If you were to go to Europe and think about ordering a milkshake... Don't! We think it was butter, sugar, and a little bit of milk. Then, a lot of us got these sugary pretzel cone things that were very good! On the way to our hote, the party bus was filled with theological questions instead of DJ Rev's jams. The drive was beautiful, especially when it started to snow. The snow-capped mountains made a perfect picture. We had a great dinner with different types of meats. But the best part was the post dinner entertainment! All I'm going to say is that you should ask the teachers to sing when we get back..." 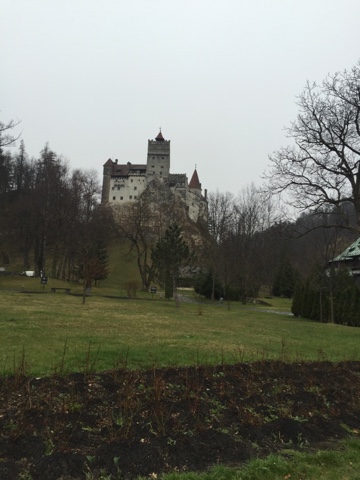 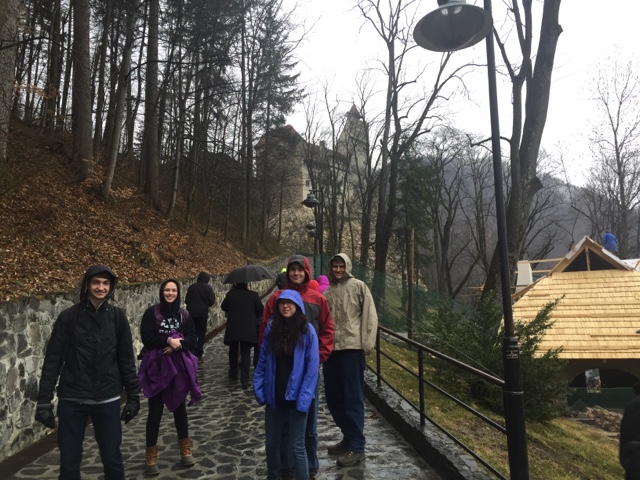 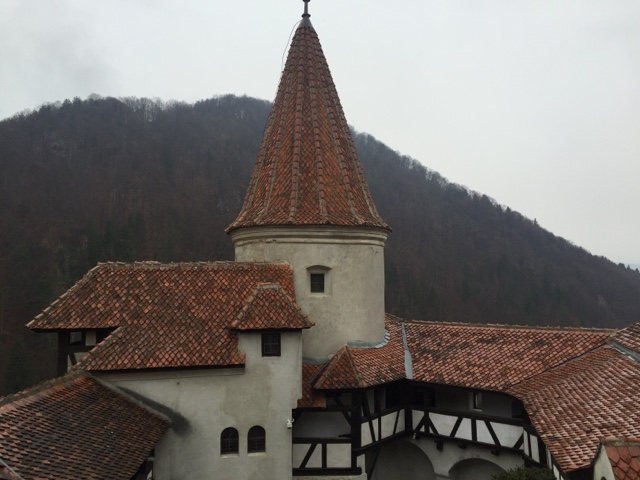 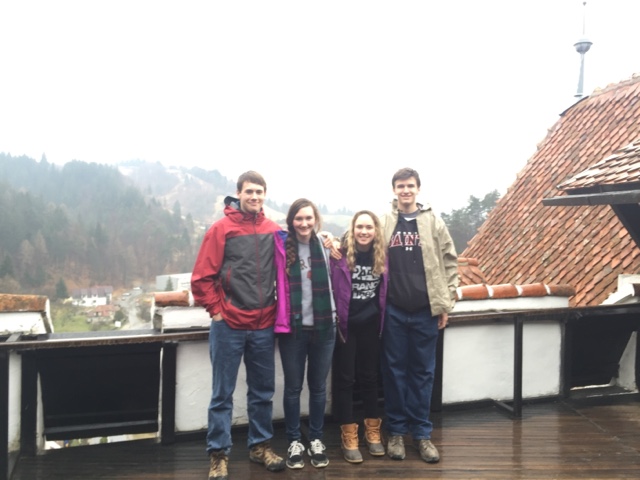 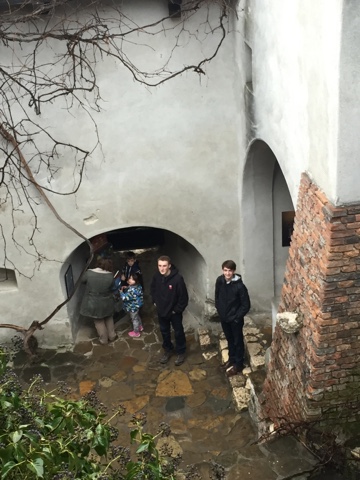 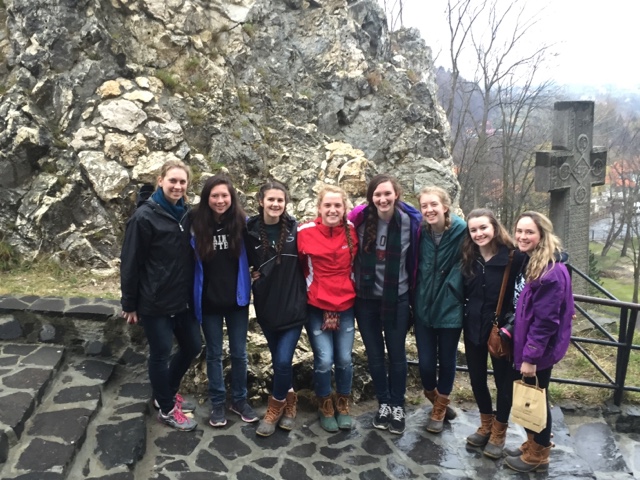 After a rainy afternoon, we once again loaded up in the vans to drive to our hotel for the night. The hotel is just lovely! We are currently the only guests, so they are treating us very nicely. Once settled in our rooms, we all came together for a family style feast. They served us plates of cured meats and cheeses, platters of chicken and pork, and homemade donuts for dessert. 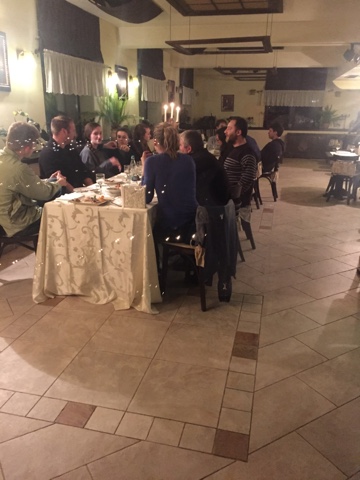 After dinner we all moved to the lounge area of the hotel where we took turns singing karaoke! Although we all agreed that no photos or videos would be taken, I think everyone would agree that the teacher team, aka Old School Teach, clearly was the best! (And by best I mean most out of tune.) **note: We would like to apologize to the hotel employees for the rarely in tune "singing" that occurred...

One the highlights of the day was meeting our guide and van driver, Father Steven. Steven is a young Orthodox priest who volunteers with Pro Vita. He speaks amazing English and we all learned so much by asking him questions about the religion, culture, and customs of being both Orthodox and Romanian. Many comparisons between religions were made and both sides of the conversation grew by the open dialogue we had. We are looking forward to growing a relationship with him as we all strive to learn more about others and their cultures and beliefs.

Tomorrow we will be visiting two more sites in Transylavia before we head back to Pro Vita for two more days before our time in Romanian is up.