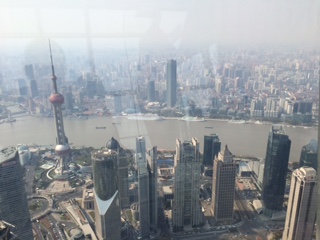 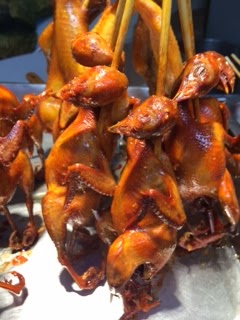 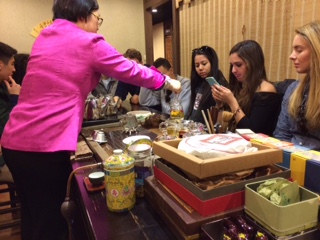 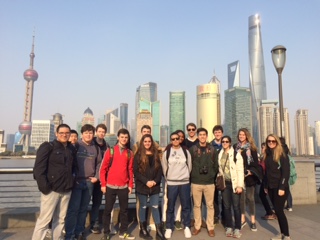 Last night we arrived in Shanghai! Hear it from the students:

The only city comparable in terms of looks to Shanghai in my opinion is New York. Even then, it still looks considerably larger and livelier than Manhattan. If I had chance to rename a city the "concrete jungle" I would deem Shanghai a better than the current city who holds this nickname.
- Josiah

Shanghai is very unlike Beijing or Xian because it is full of skyscrapers and high-rises, has many ex-pats from the United States and Europe, and has much less smog. It is much more similar to the West than the rest of China. However, there are fewer old buildings, and no great ancient monuments like the Forbidden Palace in Beijing or the White Goose Pagoda in Xian.
- Sam Dubke

Shanghai is a beautiful city boasting some wonderful restaurants, buildings, and acrobatics shows. Out of all three cities I can see myself and most westerners acclimating to life here nicely.
-Jacob

Shanghai is an incredible city. It's comparable to New York City in scale and is much cleaner. We went to an acrobatics performance last night. It made me question how I usually spend my time.
- Nick Gerson

Shanghai is undoubtedly the most beautiful city we have seen so far. The towering buildings and cultural centers all incorporate a unique architectural style that could only be found in the cultural capital of the east.
-Rob

We almost saw people so incredible stunts at the acrobatics show. Then had a small tour of the city on the bus ride back. Overall, this city looks much better than Beijing and Xian, we still have yet to explore it for ourselves.
-Paul

I loved going to the acrobatic show it was so awesome and insane. So far Shanghai is my favorite because it is a big city and i saw the cutest chow chow today.
-Taylor

As I've been saying since the start of the trip (largely due to personal bias), Shanghai is the best city in China. What it loses in sheer history it makes up in the inherent extravagance and efficiency of all facets of the city.
-Julia

So far I have loved Shanghai.  It's all so new and beautiful and really shows the future of China and where this country is headed.  We also went to the Propaganda museum and saw many original posters from throughout China's history which was both slightly frightening as well as absolutely fascinating and some were even really really beautiful.
-Nicki

Shanghai is a beautiful city comparable to the Big Apple except you can turn a corner and find a niche outside of the urban city like the Former French and English Concessions. There is a ton of influence in Shanghai from other places from imperialism, which is what sets it apart from the other cities we visited. Also, the acrobatics performance was absolutely incredible.
-Katerina

When we first got to Shanghai, I almost thought we were in New York City. The tall skyscrapers made it look exactly like New York.
-Tom

I was very surprised to see a blue sky in Shanghai! It is one of the most modern cities in China, with plenty of color and character. The propaganda museum was really cool to see, and I also got a nice smelling soap! It was fun to see my grandma again, and to share the pictures I took of the terracotta soldiers. Shanghai is fun :D
- Matthew Lu
Posted by Unknown at 9:01 PM