Today in Romania, we packed our overnight bags for an excursion into Transylvania! We woke early, ate some breakfast, and loaded onto the bus for a couple hour trip to our first destination: the city of Brasov. Brasov is located north of Pro Vita and is the second largest city in Romania. While in the city, we visited the 13th century Biserica Neagra (or Black Church). The church was originally built by German settlers as a Catholic Church but was taken over by Lutherans during the Reformation. Isabel Shaw described the church visit below.
"This mornig we woke up to slightly sore shoulders but a pretty accomplished feeling. After all, we had spent 10 hours working the day before! As usual, we started the day with a delicious breakfast (with lots of bread of course). Then we were off to the bus for a day of being typical American tourists.
We trudged through a foggy, rainy day (a break in the great weather we've been having) to the Black Church, an impressive 15th century gothic church complete with vaulted ceilings and lots of columns. Father Cavanaugh explained to us the symbols of the pulpit, which was simultaneously a statement on Catholicism vs. Judaism (unfortunately medieval Christianity had a confusing and distorting view on other religions) and a statement about communion. The pulpit was a place for the priest to stand above a statue of Moses who was seen as a Jewish figure and a chalice which symbolized how the blessing was equally important as Eucharist.
In the back of the church was a room with marble faceplates. Ms. Fusina commented that the statues commissioned by wealthy churchgoers was "the old equivalent of social media" showing who had the wealth and power.
What's really cool is that currently, the Black Church serves as an amalgamation of modern Christian faiths.  With 98% of Romania being Orthodox, the chuch holds services for all other Christian religions: Lutherans, Anglicans, Catholics, etc."
Unfortunately, no photos were allowed inside the church so I only have a few from outside. After the church, we ate lunch in the city and spent a little time walking around a piazza near the cathedral. 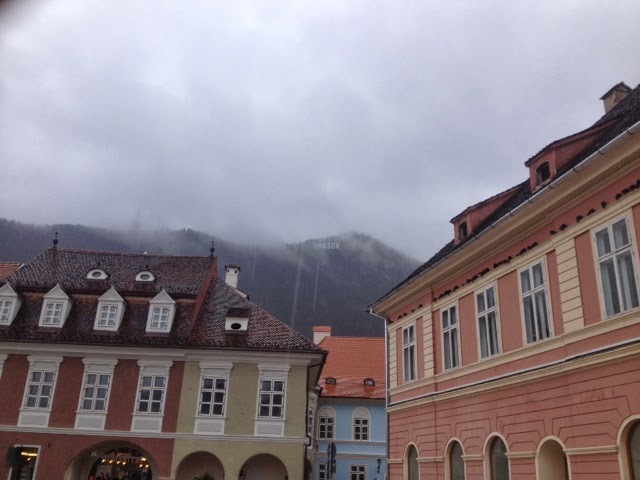 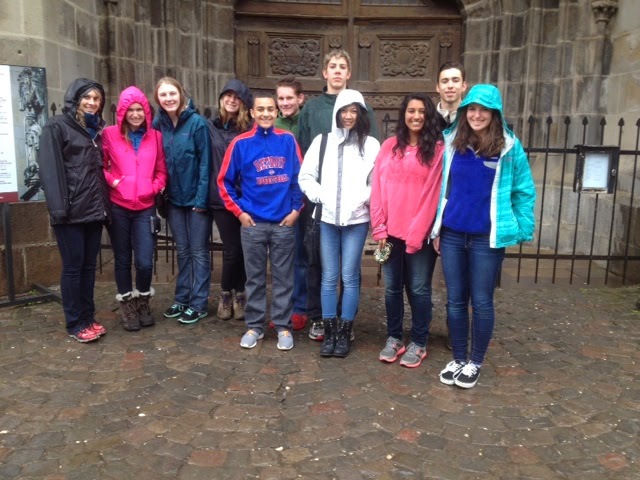 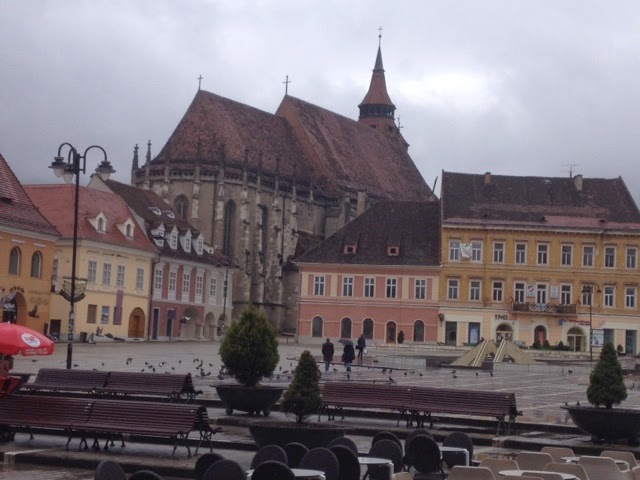 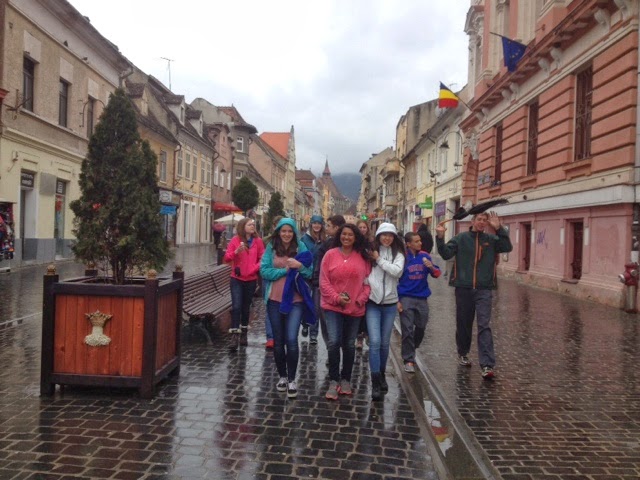 After Brasov, we got back on the bus and drove to the town of Rasnov where an old medieval fortress is located. Luckily the rain stopped so we were able to enjoy the view, ancient weapon throwing, and black smithing. Eric Karsten wrote about his time at the Cetatea Rasnovului.
"Our visit to Fort Rasnov began with a little bit of haggling in the market below. We found little success in that discipline. The group then took a tractor-tram up to the fort. It was a large stone fort that had been used by the Romanians to hide from the attacking Ottoman Empire.
The first thing we did when we entered the fort was hike all the way up to the panoramic views at the forts peak, which was where the chapel used to be located. There, we took an extensive series of both selfies and group photos before continuing our exploration.
Among the attractions offered at the fort was axe-throwing. Some members of our of our group tried their best at throwing 7 axes at 3 different wooden targets. There was also an archery exhibition, but it wasn't open while we were there.
We met a few interesting characters during our visit to the fort. One was a blacksmith with unexpectedly good English. He brought up Nicki and had her make a nail (which she got to keep). We also met an actor who was dressed as a traditional Romanian. He collected coins and showed us his US state quarter collection." 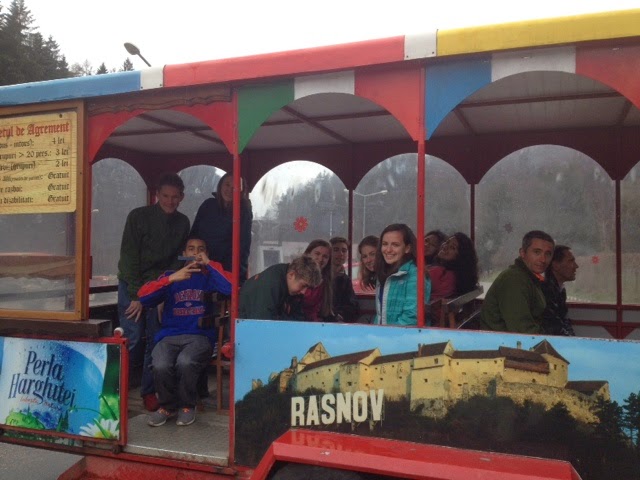 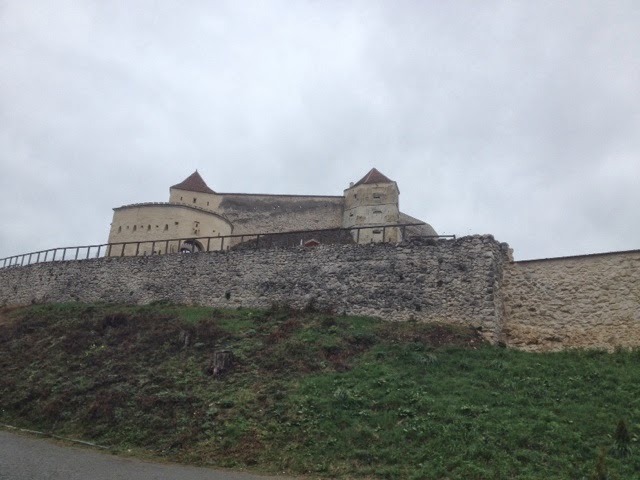 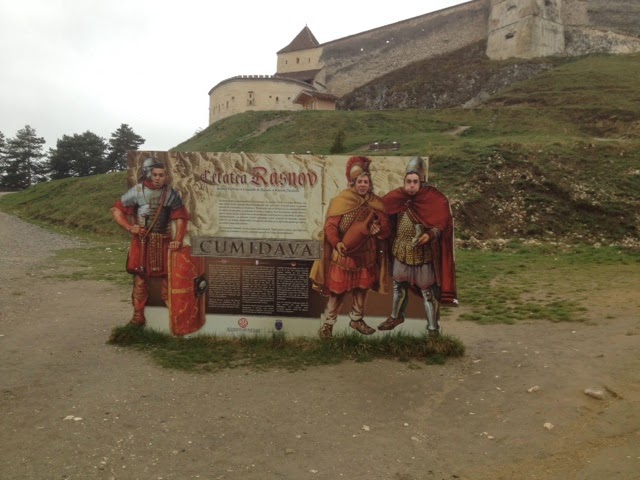 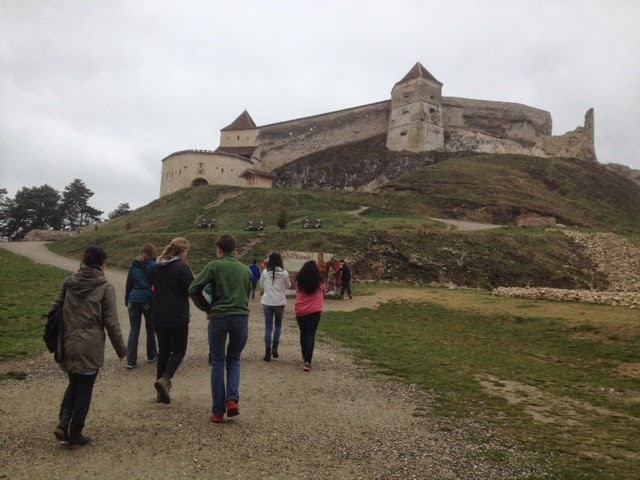 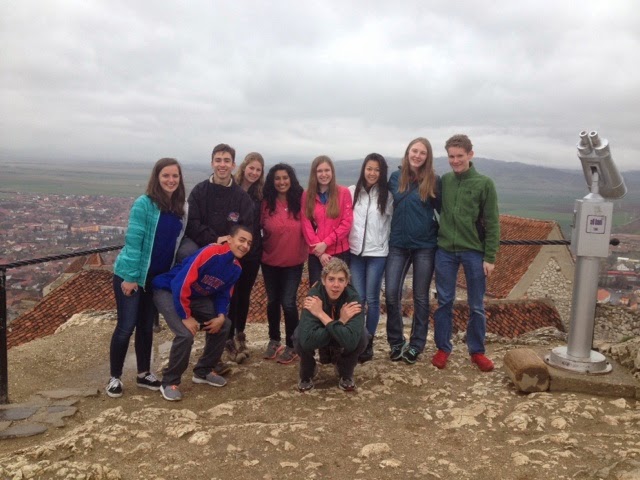 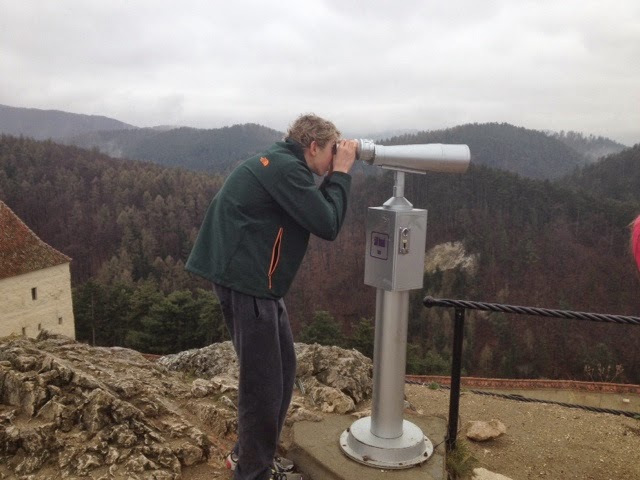 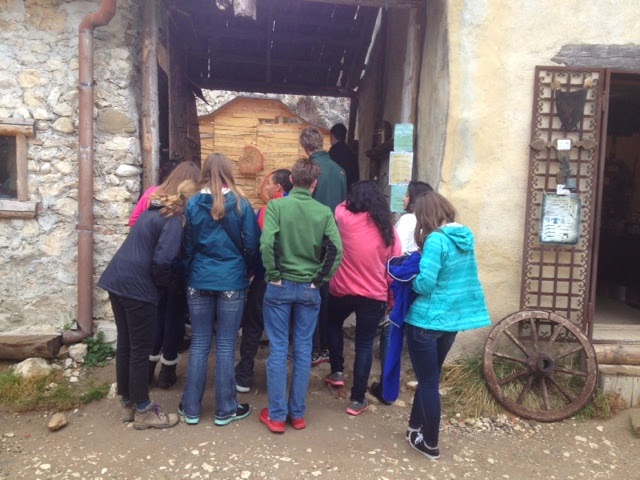 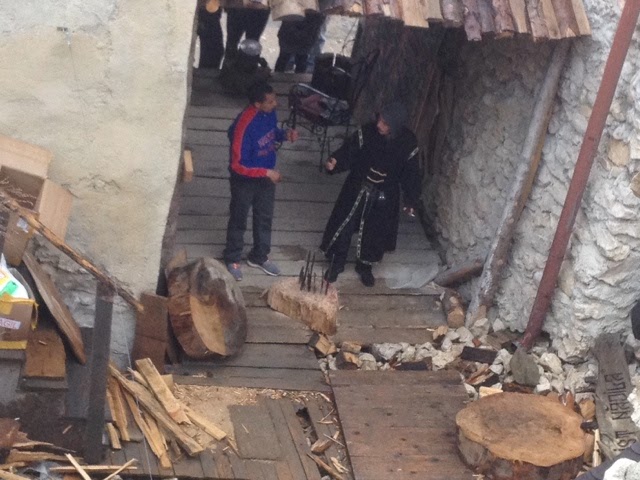 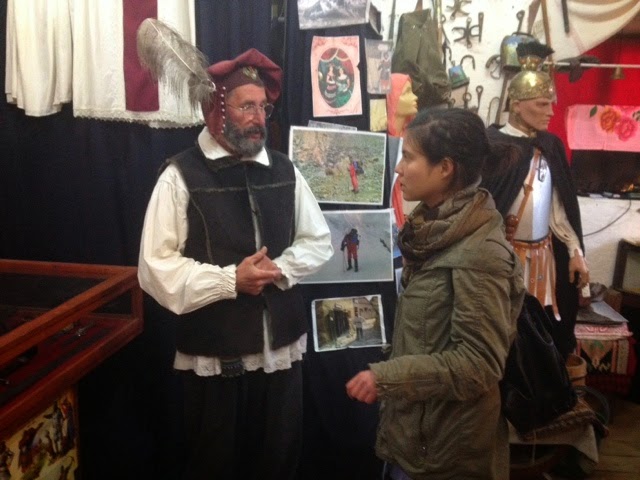 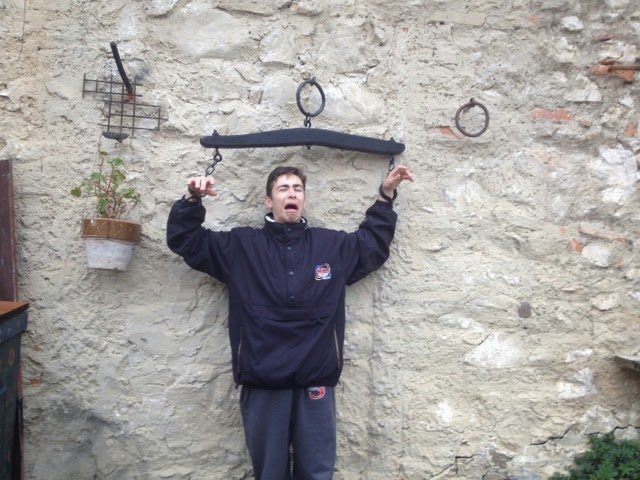 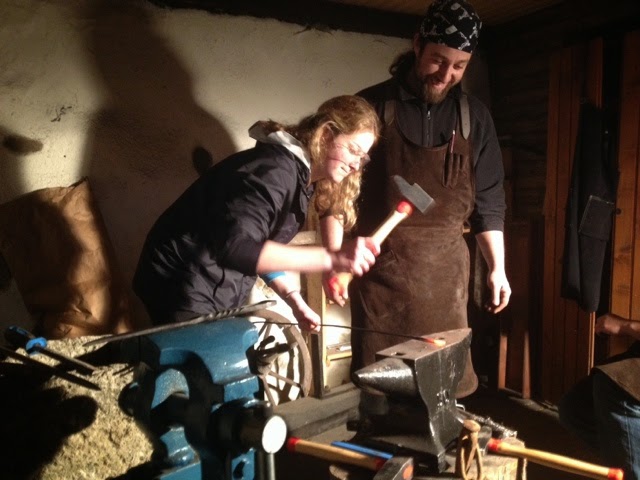 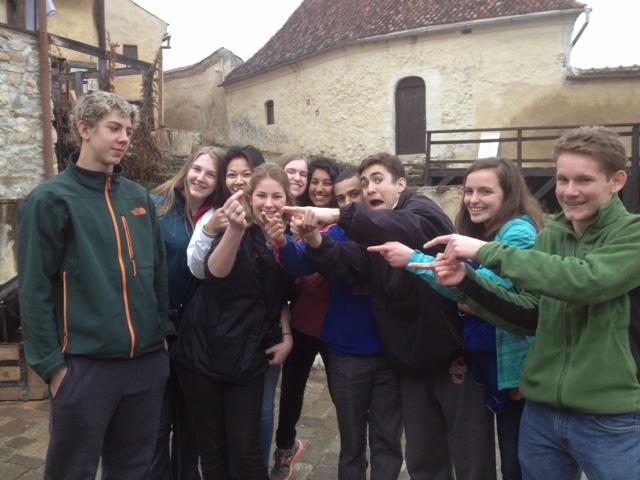 After the fort, it was time to head to the hotel. The students played some cards before a very delicious candle lit dinner. Our Saints are now relaxing, hanging out, and enjoying the hot showers before bed. Tomorrow will be another day of touring Transylvania with two castles and exploring Carrefour (the Romanian equivalent of Walmart) on the itinerary. Until then! 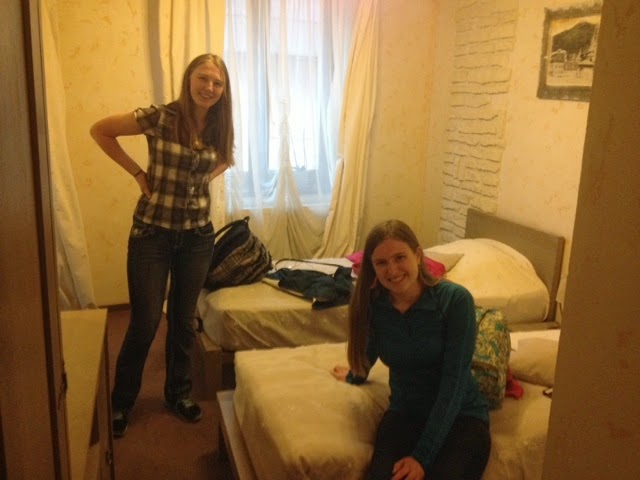 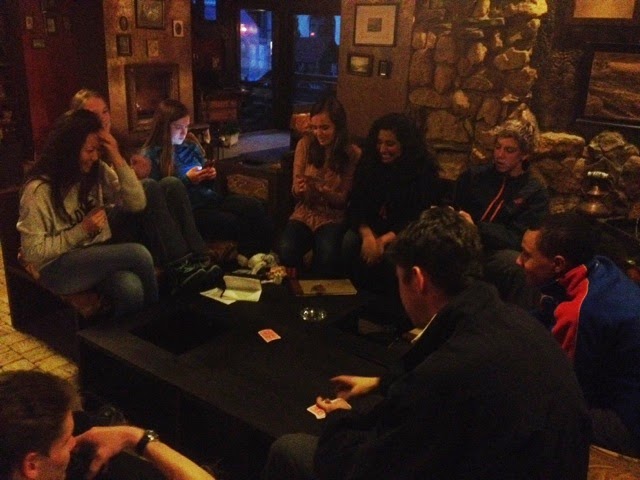 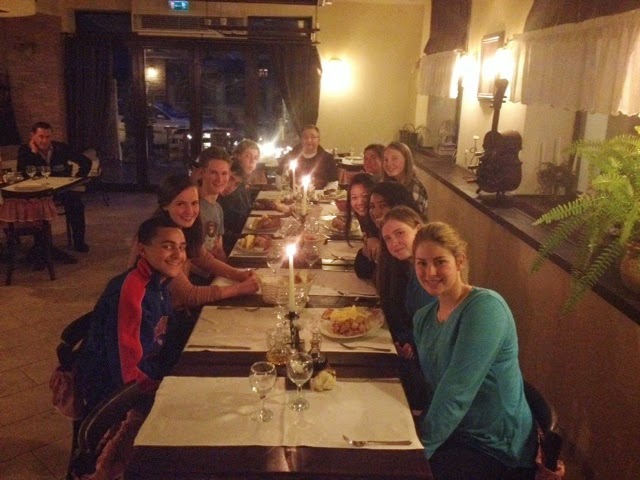