All of us fell asleep on the train from Paris to Bayeux, so we arrived well-rested and excited to be reunited with our French correspondents - teachers and students alike.  Our students immediately went off with their French families ("familles d'accueil") while the chaperons were treated to a lovely meal at the home of Mme Laurence Spreckley, whom some of our loyal readers may remember, as she accompanied the French students when they visited SSSAS at the end of February.  On Monday, we were all reunited at the Lycee Jeanne d'Arc, where the students attended morning classes with their correspondents, while Ms. Hunt attended a history class on "La Totalarisme" and Mme Scott caught up with some grading. 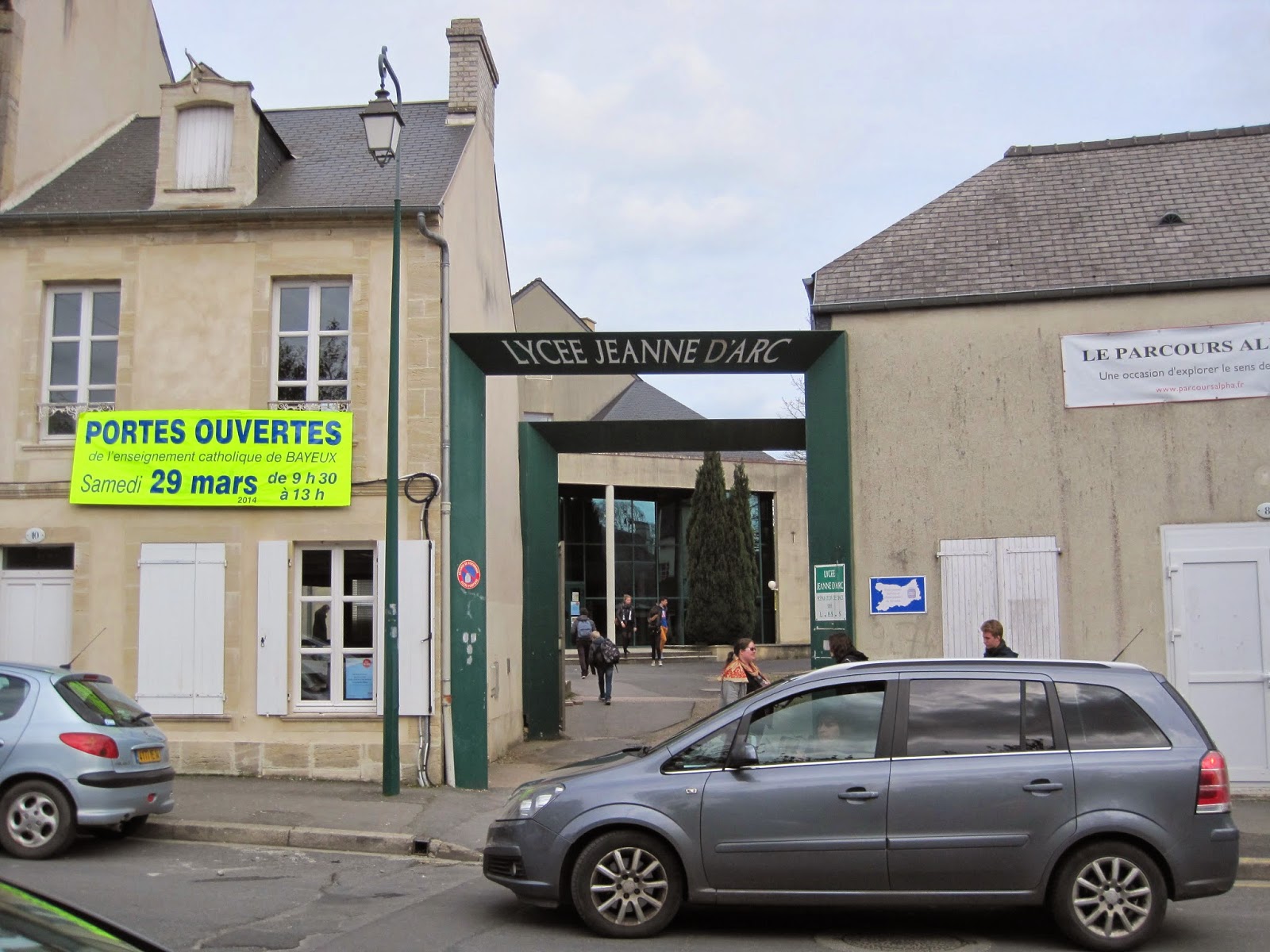 Here are some of the students' first impressions:

"When we arrived in Bayeux, Vanessa and her mom met me at the train station with 'Bonjours' and bisous. We went to her house where I met her father and her sister Laura. For lunch we went to a Chinese buffet in Bayeux.  It was really good!  We then spent the rest of the afternoon walking around the small, beautiful streets of Bayeux.  We saw the Cathedral, the beach [editor's note: they must have driven to the beach!], and lots of quaint shops.  For dinner, we had crepes 'avec jambon et fromage.'  After a full day, I had a wonderful sleep waiting for school the next day." - Dylan Reynolds '14


"On Sunday when I arrived in Bayeux, I went to Clara's grandparents' house to celebrate her aunt's birthday.  Her family was very nice and funny, her grandfather especially.  They asked me many questions about the United States, and it was a big deal to host an American.  Her family showed me pictures of their ancestors and relatives.  It really interests me how families in France stayed in the same place for generations and endured many aspects of history that I learned about in class last year.  In contrast, everyone in the U.S. are immigrants and not many stay in the same state their whole life. (continued below)

"On Monday, we went to school and I was able to see what the education system is like in France.  I noticed that the adults are more authoritative and the kids are more respectful in France.  In the U.S., kids treat their teachers more disrespectfully.  The French are very traditional while Americans are more liberated... When I went back to Clara's house, her family and I talked about education, politics, and medical circumstances in America.  It was enlightening to listen and learn about another perspective on things from people who are not your nationality." -- Jess Alexis '15

"After a sleep-filled train ride, I stepped into the fresh Normandy air to be received by my French correspondent, Thomas, and his mother and sister.  I successfully completed the "bises", to my surprise.  After seeing Thomas' old yet modern house, we set off to his grandparents' house in the countryside.  His family was very inviting, and I enjoyed a delicious French lunch and typical Sunday spent with family.  After playing some soccer with Thomas, we got to play laser tag, believe it or not, with some of the other students in the program.  The Americans came out victorious in our match against the French.  What I found to be the most important and special part of my time in Bayeux is how kind and accepting my host family has been.  They are patient with my French speaking abilities and offer me copious amounts of food.  I am thankful for the my time here and the opportunity I have had to be with Thomas and experience a true immersion into French culture." -- Jack Hall '14

A teacher's perspective:  "While I have visited France many times, this was my first experience at a French school.  My very first impression was one of stress -- lots of last-minute rushing around and little interaction with the students. No one is there to greet the students when they arrive, and everyone seems to arrive at the last minute and have to hurry off to class.  Everyone has been very welcoming and lovely, but always in a hurry.  I attended one history class, and while the material was very interesting (how and why totalitarianism developed in the wake of WWII), the presentation was rather dry.  Incredibly well-organized, but dry.  Apparently what I observed was a very typical class.  The teacher showed a PowerPoint and talked; the students took notes.  There was no discussion and a minimum of interaction.  The teacher didn't converse with any of the students before or after class either.  Now I understand why the French students comment every year on how different our school is!  It is, quite simply, a very different system with a very different philosophy.  As Jess commented earlier, there is an atmosphere of respect for authority (and don't get me wrong -- I'm all for that!), but I find I miss the respect we teachers have for our students at SSSAS."  -- Ms. Jean Hunt

Finally, on Monday evening, we were formally welcomed by a representative of the mayor of Bayeux at a "pot d'accueil" in the Mairie.  A "pot d'accueil" is a small reception where you drink (orange juice in our cases) and listen to speeches.  All of the French and American students in the program attended, and we were presented with gifts from the town.