Saints in France:  "We can forgive, but we must never forget."

A tour of the D-Day landing sites and the American Cemetery at Colleville sur Mer. 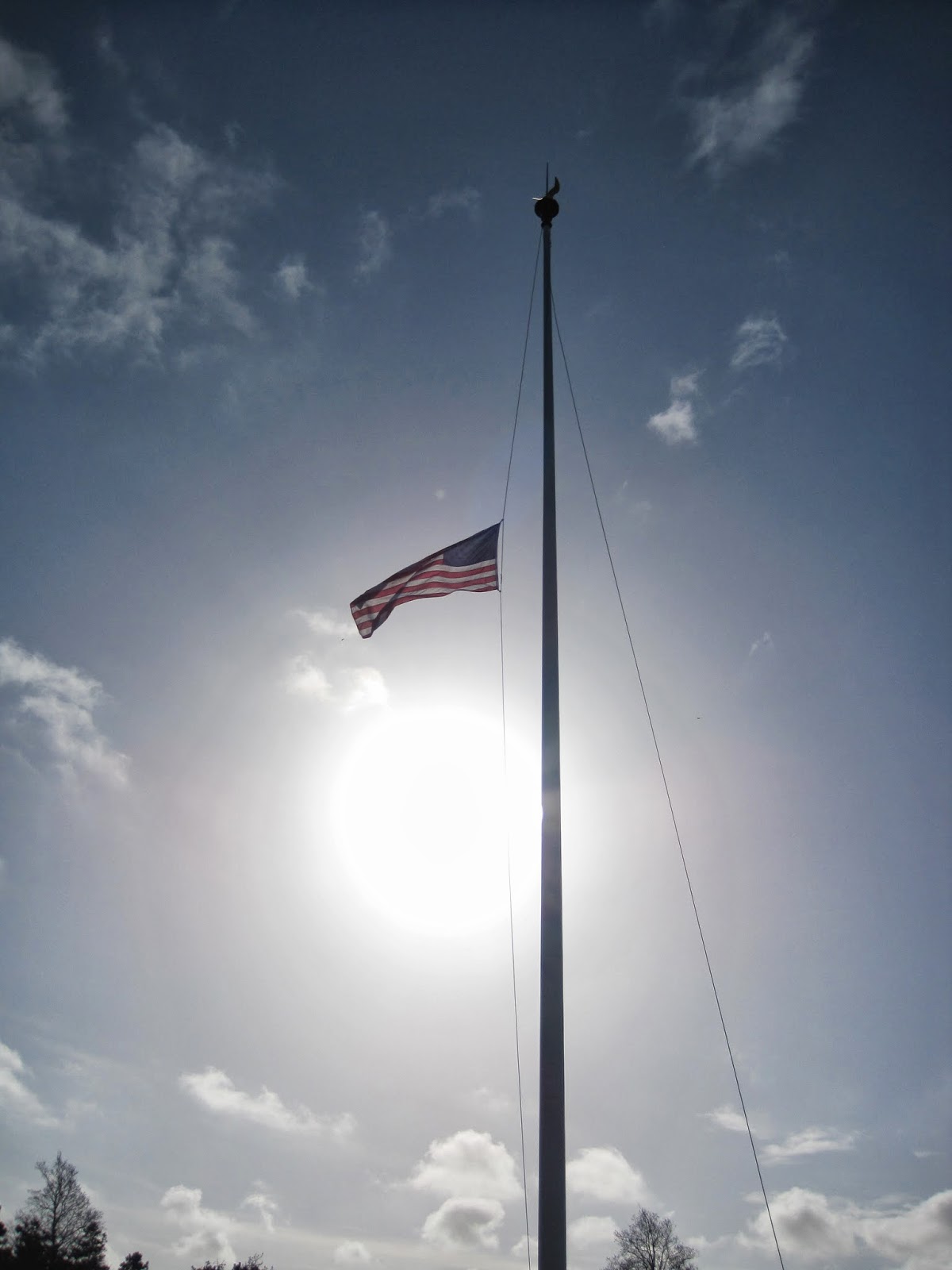 "When we arrived in Bayeux, the pro-American attitude stood in stark contrast to the judgmental looks we received in Paris.  The inhabitants of Normandy are open in their gratitude to the 'American soldiers who sacrificed their lives for some French farmers they didn't know,' as our tour guide put it.  Seeing the care with which the people of Bayeux have tended the various monuments was touching; seeing the bleak cliffs that American Rangers scaled under German fire was chilling; and staring at the white sea of graces at the American Cemetery was incomprehensible.   I highly recommend the experience to any Americans, especially as a reminder of the price that must be paid to protect western civilization." -- Graham Smith '14 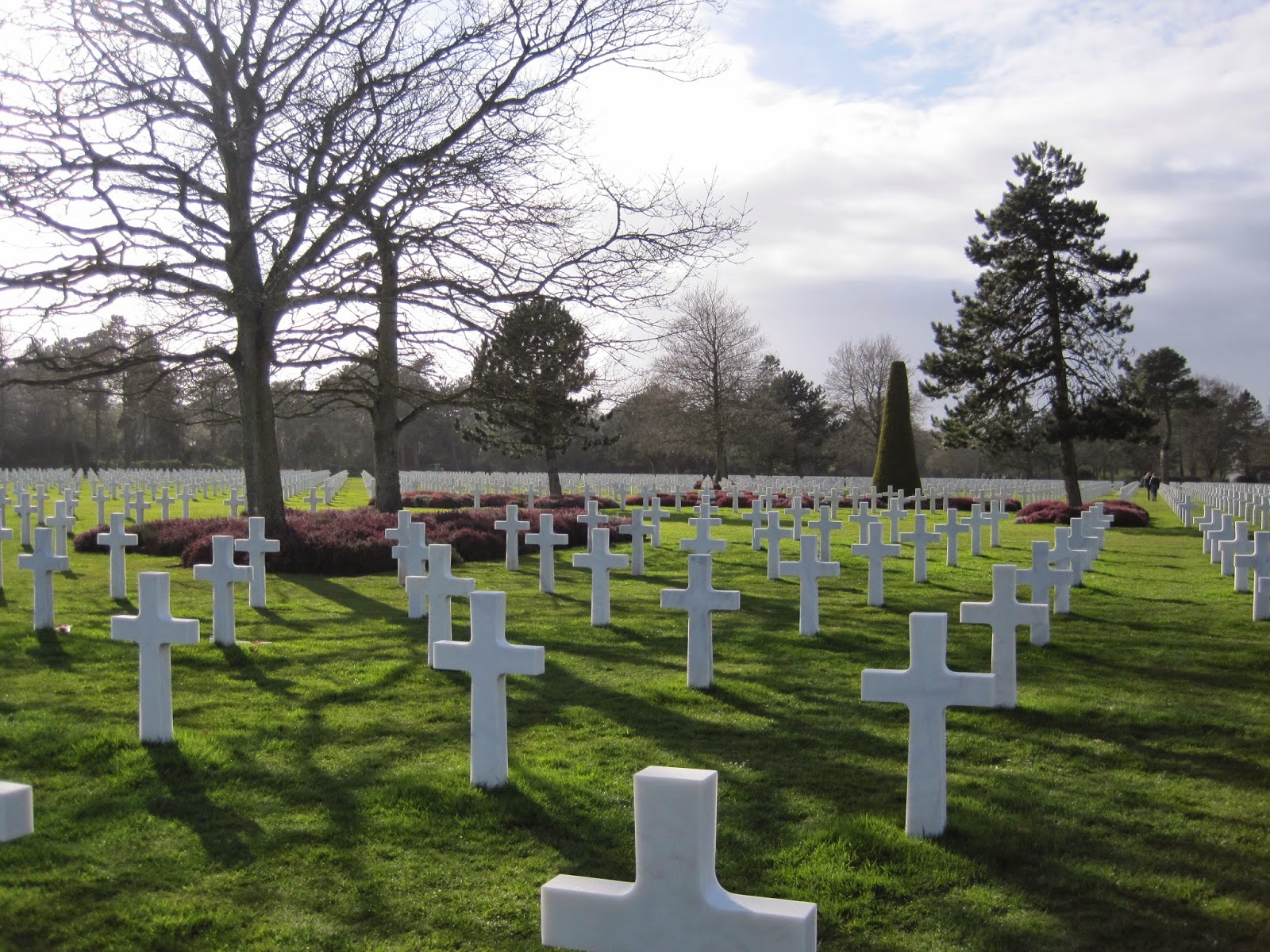 The tour began at La Pointe du Hoc, where the 225 Rangers climbed the cliffs to disable the "Snakehead" - the strategic German command point overlooking the beaches.  This particular place has been left utterly untouched since World War II, and the exploded bunkers and bomb craters, now covered in wildflowers, remain in mute testimony to the destruction of that particular engagement.

Our tour guide, Mathieu, was excellent, and provided us with lots of information and anecdotes to make the battlefields and strategies come alive.  From Pointe du Hoc, he then took us to Omaha Beach, where 35,000 US soldiers came ashore on June 6, 1944 -- seasick and scared, and penned in by high cliffs and German cannons and machine gun posts.  Mathieu was very good at explaining the mission of the allies as well as the defense strategy of the Germans. 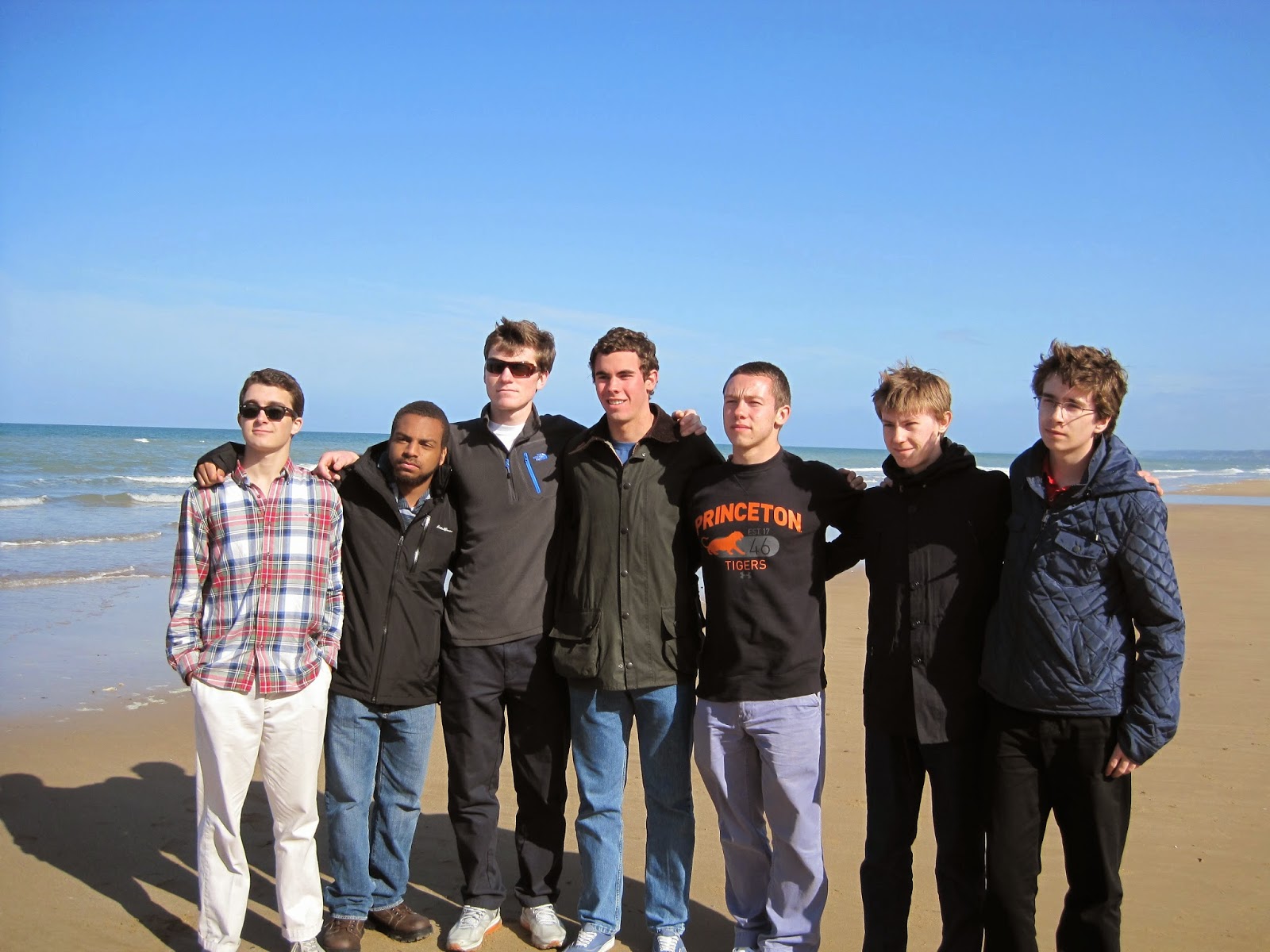 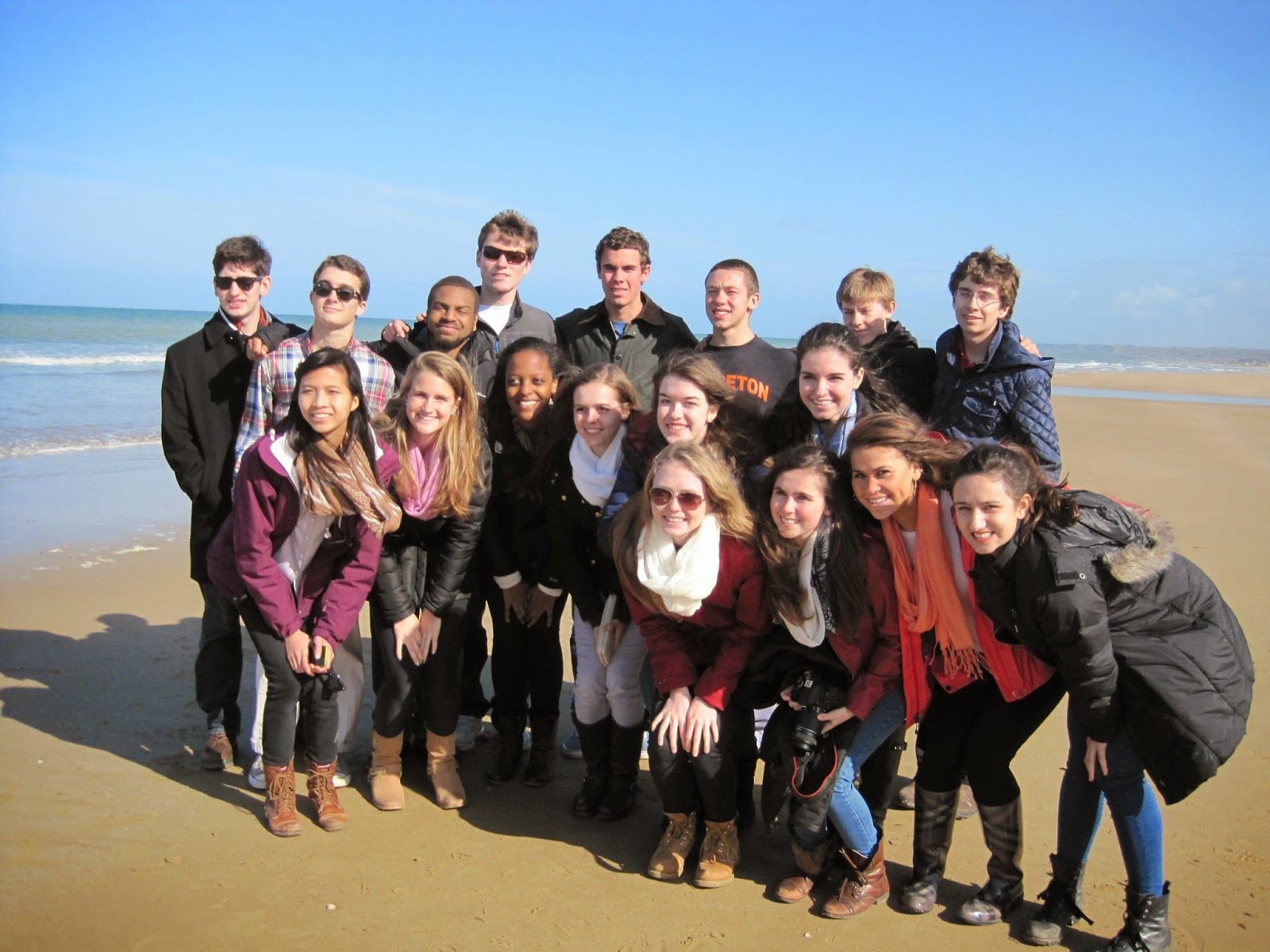 From Omaha Beach to the American Cemetery at Colleville sur Mer...

"The cemetery was beautiful and really did remind me of America.  I can see why people chose to have their family members buried there." -- Parker Phippen '14 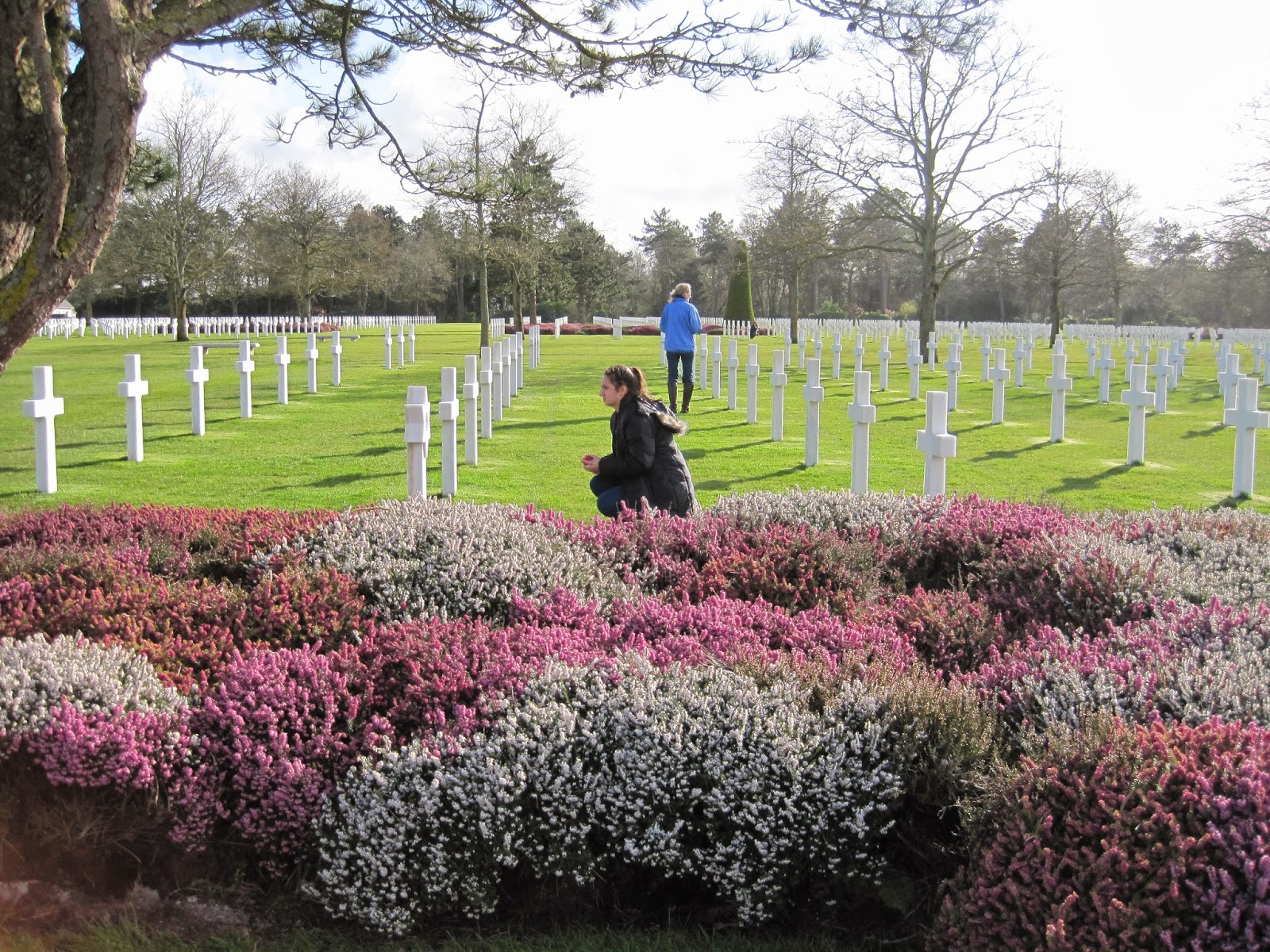 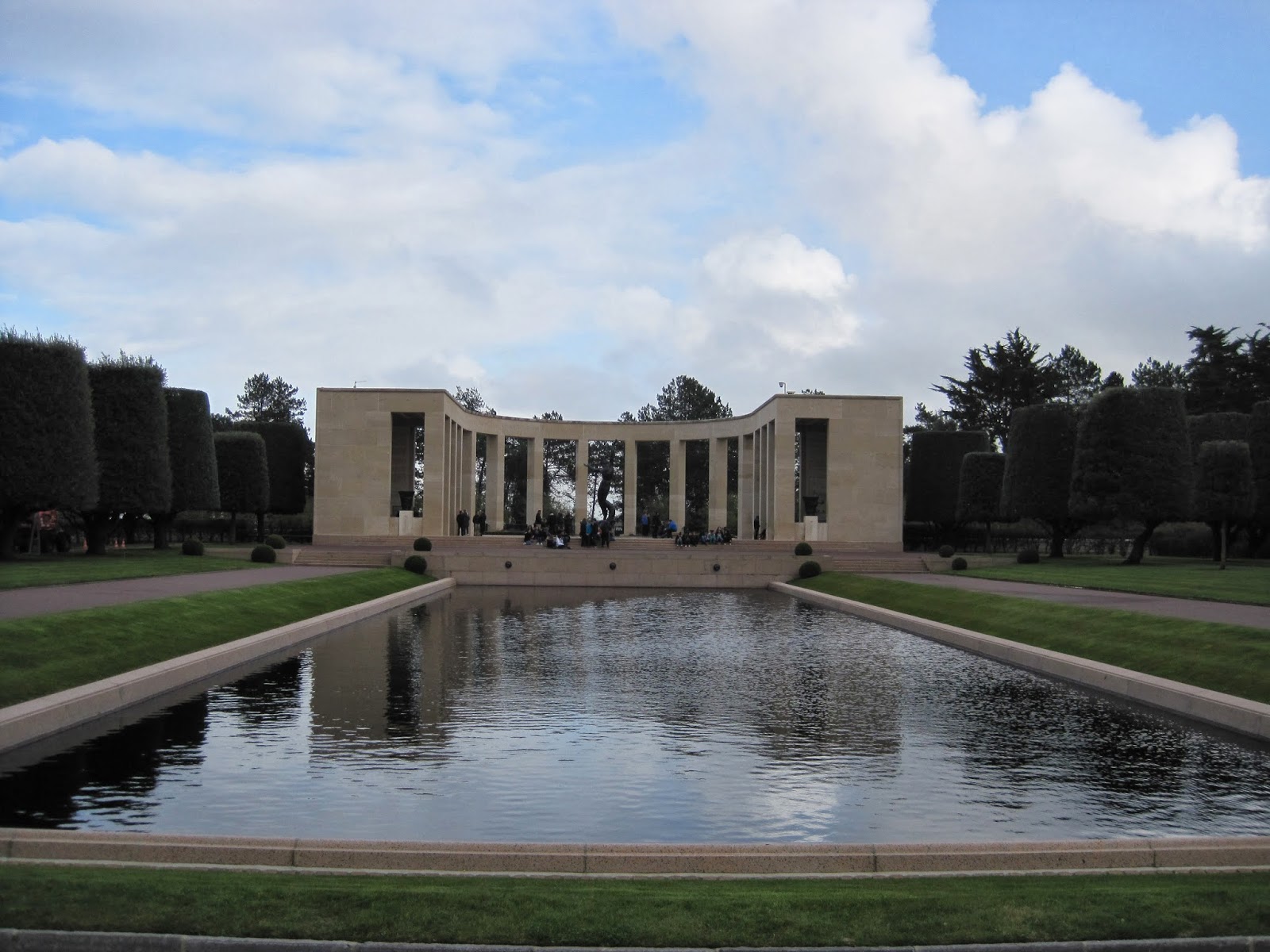 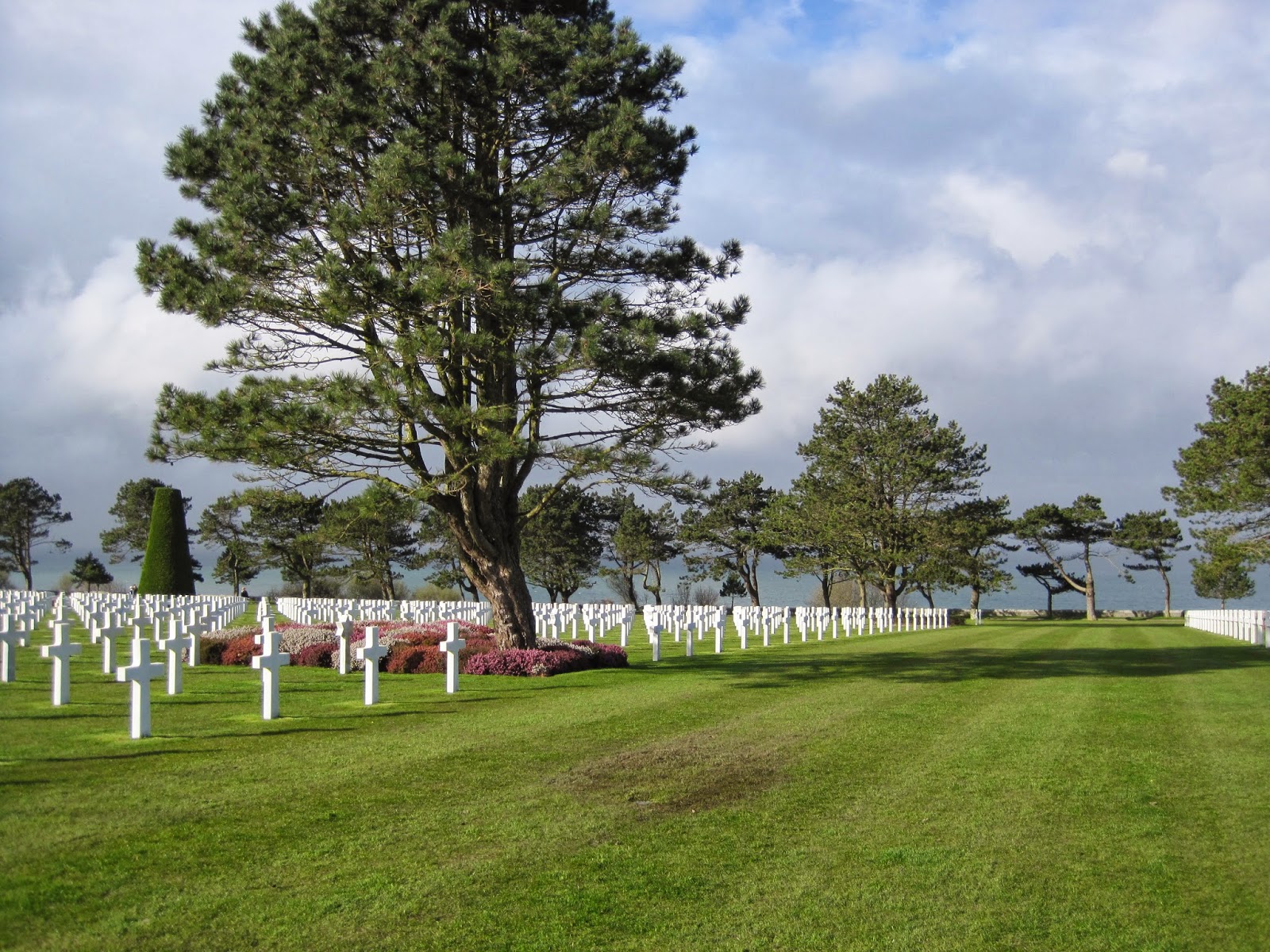 
"On Tuesday, we began our sunny afternoon tour of the stirring D-Day beaches. Walking along the distinct coastline of rugged cliffs at La Pointe du Hoc (no worries, we were behind barbed wire for security), standing on the sands of Omaha Beach, and paying our respect to the fallen soldiers at the American cemetery were somber and momentous points of our visit. Our tour guide, Matthieu (the grandson of a captured French farmer) shared with us so much important history our country shares with France (and all other countries involved in WWII). At different times during our tour, he would recount actual events which were inaccurately played out in films, such as in Saving Private Ryan. For example, there were no two brothers serving in the same unit during the war. “Don’t believe everything you see on film,” Matthieu would often repeat. He shared a few family stories told by his grandfather, making the excursion authentic and captivating.
This being my third visit to the American cemetery with groups of students, I am always impressed by their maturity and respect for this beautiful and tranquil place of rest for our fallen soldiers. Upon entering the cemetery, one walks alongside a wall of names of unaccounted soldiers and shortly thereafter, approaches the countless rows of smooth, limestone-white gravestones. Early in the visit, we were able to watch a small ceremony in which six retired American officers were recognized for their years of service. They also brought down both American flags while a large gathering of visitors observed nearby.
Despite the enormous sense of loss and sorrow, to me, this hill-top cemetery which overlooks the Atlantic Ocean, remarkably connects the soldiers to their home. I find there is no separation, nor spanning distance between them.  In a nearby memorial room, the wall engravings were uplifting:

“Think not only upon their passing- remember the glory of their spirit”
and
“Through the gate of death may they pass to their joyful resurrection.”

We left the American cemetery as the Normandy rain fell and the winds swept us up on to our bus. The students were ‘blown away’ (pardon the pun) by the afternoon's visits." -- Mme Kim Scott 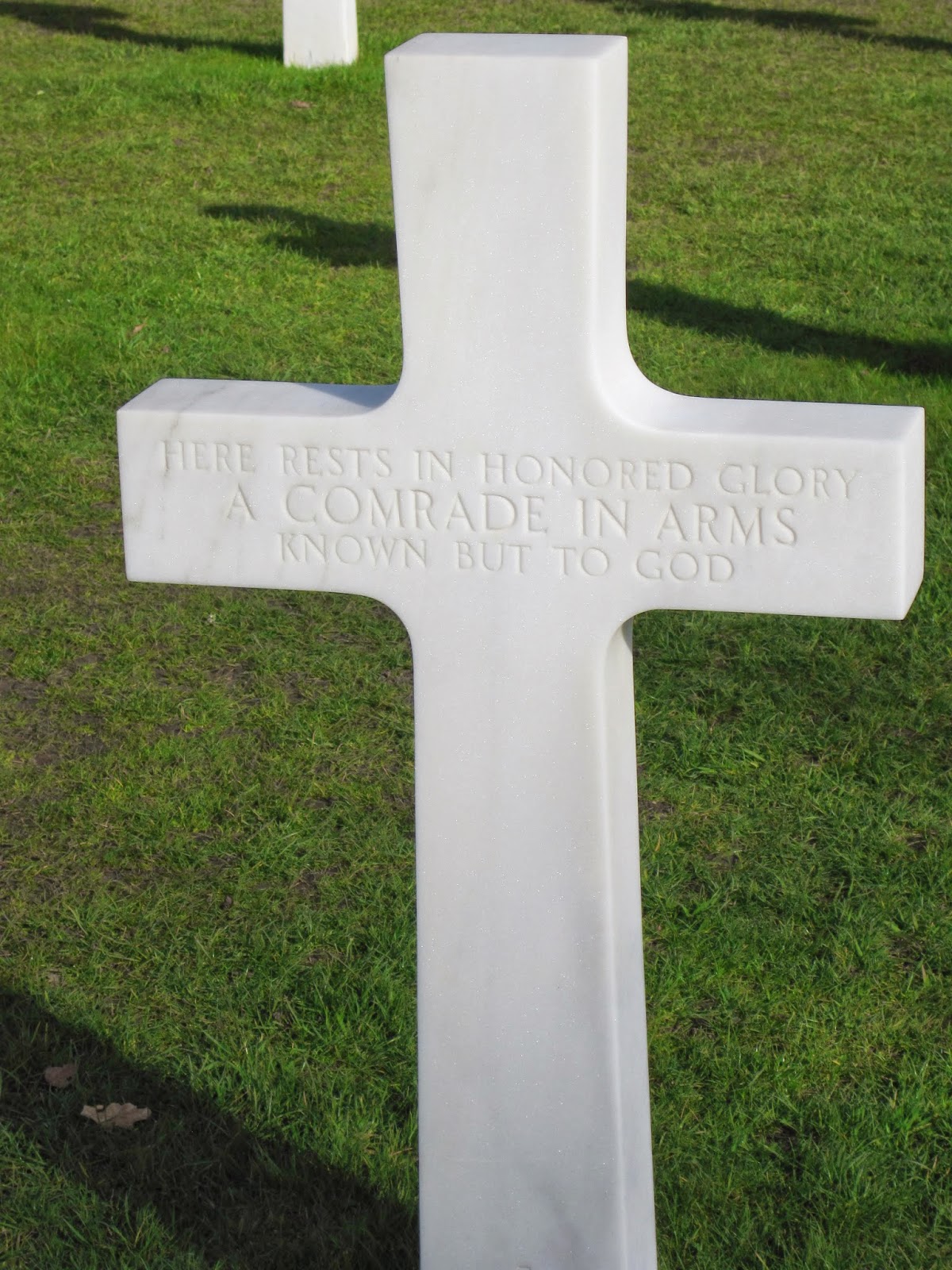