After a full day of traveling, we landed in the small and humid Port-Au-Prince airport.  Once through customs, we were greeted by Father Walin and Madame Serena.  They helped us gather our luggage and make our way through a tunnel of eager bell hops. Once past the hectic pathway we began to load our luggage into, on top of, and within a van, truck, and a car. After we loaded all the bags, we piled into the vehicles to begin our two hour journey to Montrouis. This bumpy ride provided us our first glimpse into Haitian life and the opportunity to bond with each other before the work really began. Although it was dark and we could not see very far, what we did see were small residences seemingly piled on top of each other just on the side of the road. Among these precarious homes we saw many people bustling around cooking and socializing only mere feet away from the chaotic main road. Two hours later we arrived at Moulin Sur Mer and prepared for the week ahead.

The next morning we awoke to a sea side view, and ate a delicious Haitian breakfast by the water. Shortly thereafter, we departed, supplies in hand, for the seminary and the first day of camp. On the way there we were in awe of the chaos alongside of the busy road, and our minds began pondering what we had waited months for. After months of planning, our ideas were finally materializing. Upon arrival we organized the supplies and proceeded to introduce ourselves to the kids. Our introductions quickly became playing games of soccer, keep away, passing, and music making. One girl in our group started singing the Macarena and our group along with several others joined in.  Something that stood out to us was how welcoming the children were. Minutes after we arrived kids were holding our hands, braiding our hair, and asking us to join in their games. We thought that we would be more of instructors rather than friends and playmates. Specifically, while we were taking a break from an intense game of soccer, a group of girls came over and began styling our hair. Within fifteen minutes we were sporting new hair-dos that we left in for the rest of the day. Our first day was wrapped up with a tasty lunch of rice, beans, plantains, chicken, and potatoes. On the way back to the hotel, we finally had a quiet moment to reflect on the first day.  The day’s activities did not quite follow the schedule we had planned at home, but nonetheless it was an eye-opening day full of fun activities and new friendships. 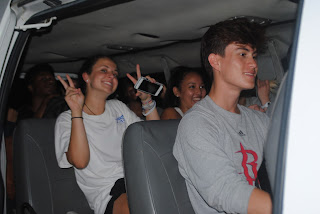 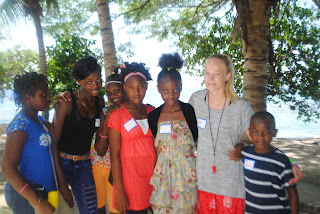 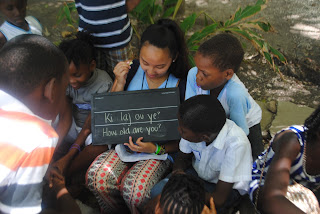 Day #3-
By Taylor and Matthew

After the first day of camp, we were moved to create a different approach to day 2 because our previous plan wasn’t as organized as we had liked.   By now we had become more comfortable in this new setting among so many new people.  The plan we created included making tie-dye T-shirt, bags out of T-shirts, and friendship bracelets.  We had planned to be more organized and let each individual group switch between stations during play time. Upon arrival on campus, the day began like the previous day except we were greeted with warm hugs and familiar smiles.  All the kids knew their groups and held on tightly to our hands, arms and torsos when called. Our morning activities included soccer and the ball tossing game “taps.” Halfway through play time, we stopped for an English lesson, in which we taught food, animals, and family members.  After, we started the bags and tie-dye shirts. The t-shirt bags quickly became a group project for us to bond with the kids.  The tie-dye shirts were a little messy, but we had lots of fun decorating them.  We ended with more fun and sports after lunch and left around 4.

By this second encounter, we were more aware of what we were doing, and knew more about the kids respective personalities, allowing us to maintain a sense of order among the seemingly endless wave of soccer fueled chaos. By this time the kids revealed to us that they had iPhones, Xboxes and other technology we (or at least I) had thought to be exclusive to American culture. A frustrating aspect of this was the language barrier which prevented me from acquiring their usernames for snapchat, xbox, etc. The warm greetings of the children on day two inspired us to have more energy throughout the day and cherish each moment we had with the children. This trip has become a great, new learning experience that has given us all a new perspective that we will take from Montrouis to D.C. 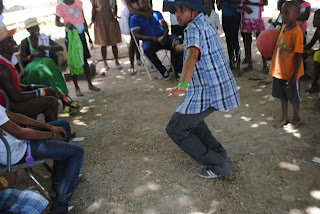 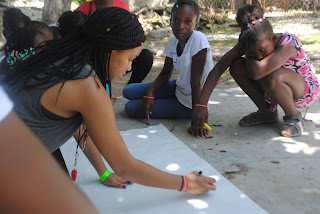 Day#4-
By Darius and Malcolm

Today was special for a number of reasons ranging from the music the Haitians and Americans shared to discussions with the children’s teacher. However, what made today especially special for me was that it was James’ birthday. James is a now eleven year old Haitian who has a younger brother Valentine and whose mother works at the seminary. After a day of soccer and reading James grabbed my hand and called out his signature “Hey!” to whisper “aujourdhui est mon annivairsaire.” As important as any eleventh birthday is, James’ really stands out not because what it means for him, but rather what is meant to me. I remember my own birthdays and how excited I felt, so seeing James’ happiness really drove home the fact the he and the other Haitians are above all kids, just like I was and like everyone has been. Even more than the hours spent kicking soccer balls, this experience showed me the humanity that we share with the Haitians. I look forward to our last day of camp tomorrow, but beyond our time here I’ll remember what is the same in Haiti and the US more than what is different. 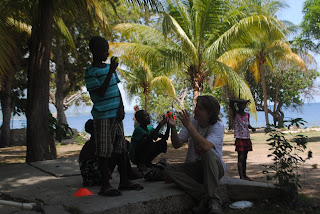 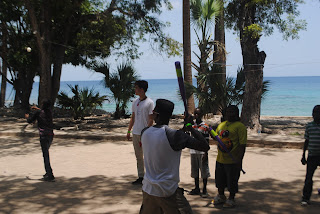 Also, today was the first day the Haitians were introduced to the musical instruments we brought. These included recorders, kazoos, and tambourines. The children seemed to have had an innate ability to play these instruments. They picked them up and started making music. It was if they had played the instruments before. Some kids sang gospel songs while others played their instruments along with the chorus. These kids showed that they had musicality, something I believe you are born with or without. You can’t teach musicality. It’s different from music theory or the simple act of playing an instrument. It’s those things combined with a certain feel for the rhythms and pitches that go along with what they are playing, and they have that.

Day 5-
By Kendall and Andrew


For the final day of camp, we made sure to leave an everlasting bond between us and the kids, and we succeeded. Our day started as a regular camp day with a delicious Haitian breakfast and an eye-opening car ride to camp. It continued with sports, bracelet making, and face painting. At first, we were worried that the concept of paint and kids would turn into chaos, but we were surprised to find out otherwise. The kids would sit in front of us and allow us to draw whatever design we felt suitable. They were not picky and did not demand specific ones, instead they were delighted with anything we drew on them. However, the main event of the day was swimming with the kids in the ocean. During that half hour swim, we were treated as family. We would be standing in the water, and out of nowhere a kid would come and hold our hand. Not only that, but they would stay in the same position for ten minutes straight. 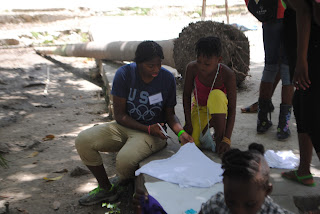 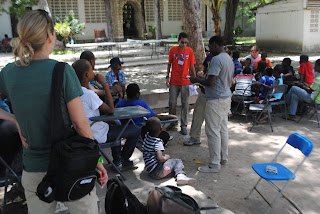 This affection shows how close the campers bonded with us within a four day period. On the first day, we were all timid and unsure of what to expect from the kids. Throughout the next few days, our relationship progressed and we noticed the kids becoming closer and closer to us. They recognized us and knew our names, and they would not hesitate to play soccer or toss a ball. Finally, on the last day we were family. The concept of us being strangers vanished, and they considered us one of them. It was the best good bye we could ask for. 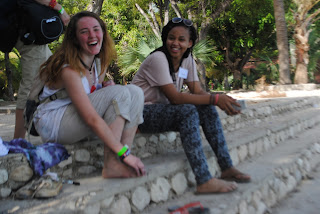 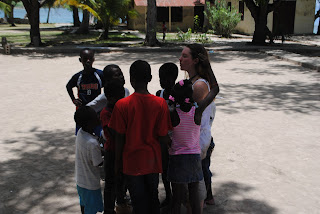 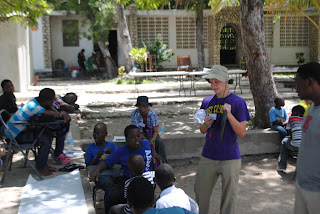 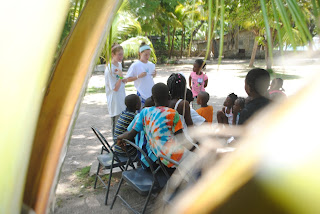 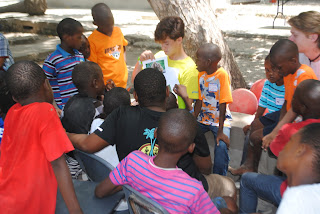 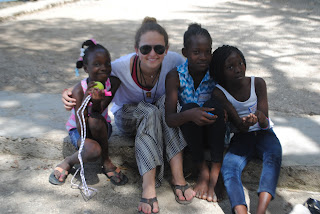 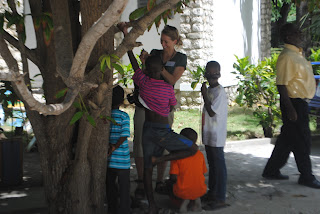 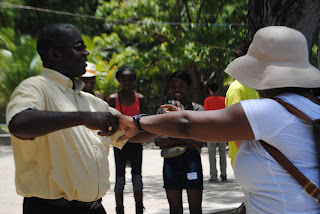 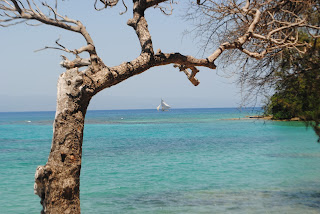 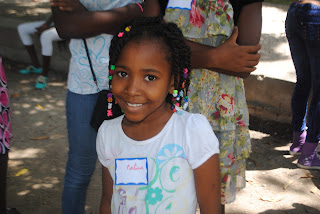 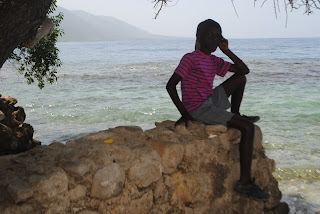 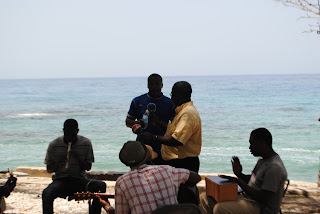 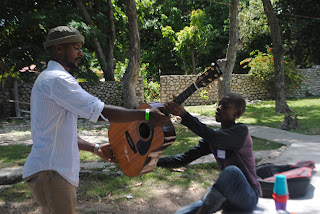 Makes me teary and proud to be a Saint! Well done, everyone! I can't wait to hear more of your stories in the fall.