Spain Exchange- hear from one of our hosts

As a junior at SSSAS, I had never participated in any kind of foreign relation. Never had I contributed to pen palling in the past, nor had I really spoken to the exchange students the years prior. I had absolutely no idea what I was getting myself into. Although, what sparked my interest about the exchange was that the experience would benefit me in the long haul. Learning about different cultures and stepping outside of your comfort zone was definitely a risk that I was willing to take in order to expand my knowledge of different cultures as well as build my character.

Once I had received my first message from my exchange student prior to their landing in the United States I could tell that Silvia (my exchange student) was the perfect match. After only a couple of instances of texting back and forth we instantly clicked. I was so surprised to find that we had so much in common and we agreed on almost everything that came up into conversation. Over the next couple of weeks we texted almost every day and I would try my best to Facetime Silvia over the weekends. I warned her that I had been participating in the musical at the time and the rehearsals would take up a big chunk of my time when she was here. She said she didn't mind at all and to my surprise everything worked out pretty well.

The first night that I had met her, we were just finishing up rehearsal when I heard my name yelled from across the room. I instantly recognized that it was Silvia and we hugged like we were best friends. I will never forget her first night with us in the home, she instantly became family. Silvia fit right in. There was one Saturday morning that Silvia insisted on cooking for us. She was confused as to why eggs were a typical American breakfast, because in Spain it is something that they have in the afternoon. Anyway, she decided to cook us "tortilla española". Although some of the egg did spill out when she tried to flip it on the plate, which was hilarious, it was absolutely delicious!!

Also, during her time here I took her to Old Town and we walked around the torpedo factory and she absolutely loved it! I also took her one night after rehearsal to see the monuments. Specifically, we saw the Lincoln Memorial and after that we went on to Georgetown where she had her first Georgetown cupcake. She loved the city and throughout her time here, our friendship continued to grow. Even the nights that we decided to stay in, Silvia was perfectly content just chilling in the kitchen with my mom and brother. While she and Chris did get in a couple of arguments, because Chris likes to debate with anyone in any possible way that he can. To my surprise, Silvia shut him down and told him exactly what was on her mind. Silvia was a tough cookie, and she told it like it is. I really liked that about her! She was so real, so genuine, and so fun! Each day after school she would always ask me how my day went and how a certain class that she remembered I was worried for went, or even how several tests and quizzes went. I cannot stress how caring she was and I really appreciate her so much for that.

During the trip I endured some heath issues of my own, and I unfortunately spent a couple nights in the hospital towards the end of Silvia's visit. During my time spent in the hospital, Silvia texted me constantly asking if I was ok and that really meant a lot. I explained to her that I felt bad because I should be home with her and I should be spending her last couple days in the United States with her. She assured me not to worry and that she just wanted me to get better. She said she was completely content and she enjoyed spending time with my mother and my brother.

One thing I can definitely say about Silvia is that she was not shy at all. The moment my friends met her in the beginning, she immediately sparked their interest and they loved her personality. When she walked in a room she instantly excited people and filled the room with pure joy.  I remember sharing a bond with her like no other kind of friendship I've ever had. We would practically finish each other's sentences. We were two peas in a pod. Sometimes, we would even just exchange a look and instantly know what the other person was thinking. It was amazing, and it was something I definitely didn't expect when I had signed up to be a host. I miss her every day. She still texts me and asks how my foot is doing, which is so sweet that she remembers to ask and that she cares so much about my well being. She tells me that she wants me to visit Spain this summer or sometime soon. I am hoping to get my mom on board because I definitely do not want this past March to be the last time I ever get to see Silvia again. There is no doubt in my mind that we will continue to keep touch and I hope that this is something that can last a lifetime. I would love to visit her country someday and have the privilege of meeting her family. 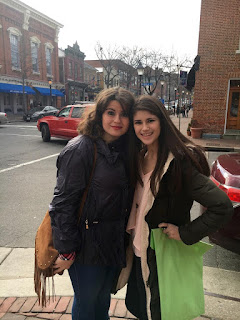